A downloadable game for Windows

It's just the demo version, full game will be available later !

Welcome to The Station, Before starting our new job you'll take the ( strange ) test of sergeant Doug in the city's sewers ! You'll discover members of the Station, capture creatures and fight the dark foggies with them, find some secrets and more !

The station demo is a little adventure, something like the tutorial part of the full game, a good overview of what can be the full version.

The game can be played with a gamepad

Thanks to my brothers, @elisee , @adventurjourney and @Noiracide for their help ! 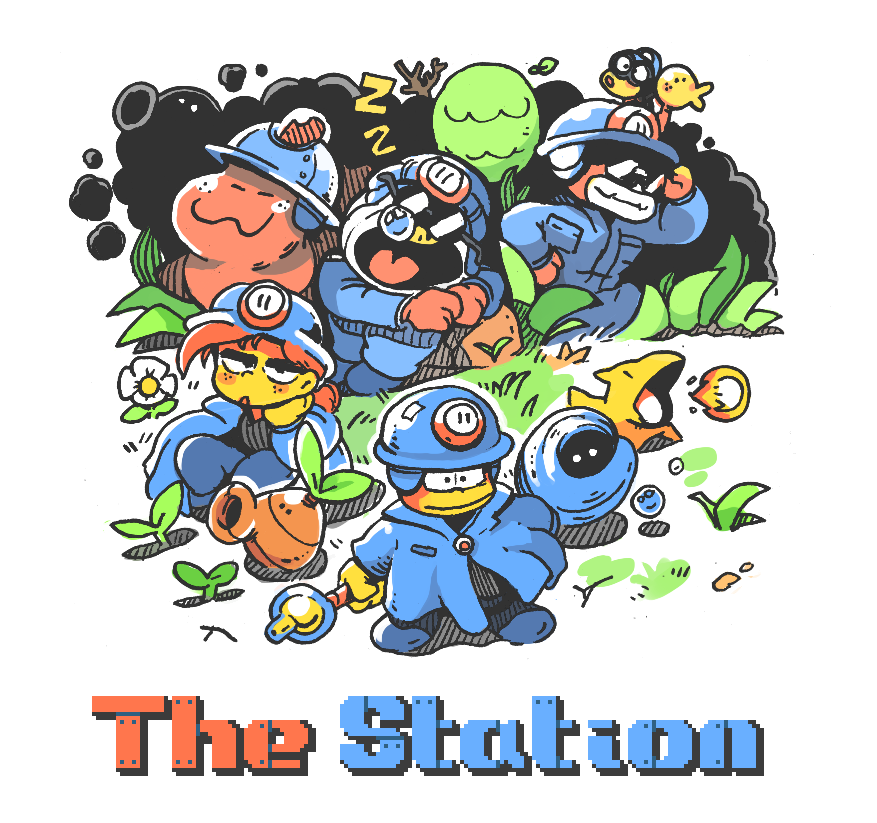 Please did MacOS version, looking really interesting! I want to buy it ( O_O)b

man this game is amazing, how I can buy the complete version and the anime series of the station ? :)

Ps : You have a course that teach made awesome games like that ?

Ps2: I here because i liked one of your pixel arts in pinterest and i know nothing from this site and stuff, so.... sorry for be weird  rsrs.

Thank you for your comment ! The full game is currently paused and TV series is not expected even if it might be nice I guess Haha

I don't have course to make this kind of game, it includes a certain number of things, the demo is made with Game maker Studio but we plan to bring the full game on Godot Engine and the pixel art is made with Aseprite, if you are interested in creating games of this kind I advise you to choose an engine, watch some tutorial and get started !

thanks man. I will follow your steps. I already follow you in yotube. I will search for tutorials about gamemaker studio. Your style of drawing,game desing, and all about this specific game just touch my heart. Your team give me a taste of a fusion of childhood and ghibili felling playing this game. So thanks A LOT !  You guys have Instagram ?

this is amazing! about time a game don't caught my attention like this one..

Thank you, glad to hear that ^^

i hope you release this for mac also, looks amazing!

Thanks, yes it should be available on mac !

YOUR ART IS AMAZING!

Loved it! I hope a longer version comes out.

+++ Tons of personality and juice
+++ Loved my dragon doggo boy

+++Harder than expected, but good!

Thanks for your feedback, glad you liked the game !

I thought that the game was pretty solid even for a demo and I am looking forward to seeing what more the game has to offer. I featured the game in my Indie Game Showcase.

Thanks for the video, glad you like the game !

Just a suggestion for next Station is it ok if we don't have to find the monsters every time and have some sort of day care?

what palette was used just intrested

excited to see where this goes. reminds me of pokemon and cave story.

Hehe thanks, yep it's probably the 2 biggest influence in this game :D

ha i finally won the game! and found all secrets the plant dude is the most powerful

2h playing for this, i really like the game (my favorite creature is the purple rhino, is the best) 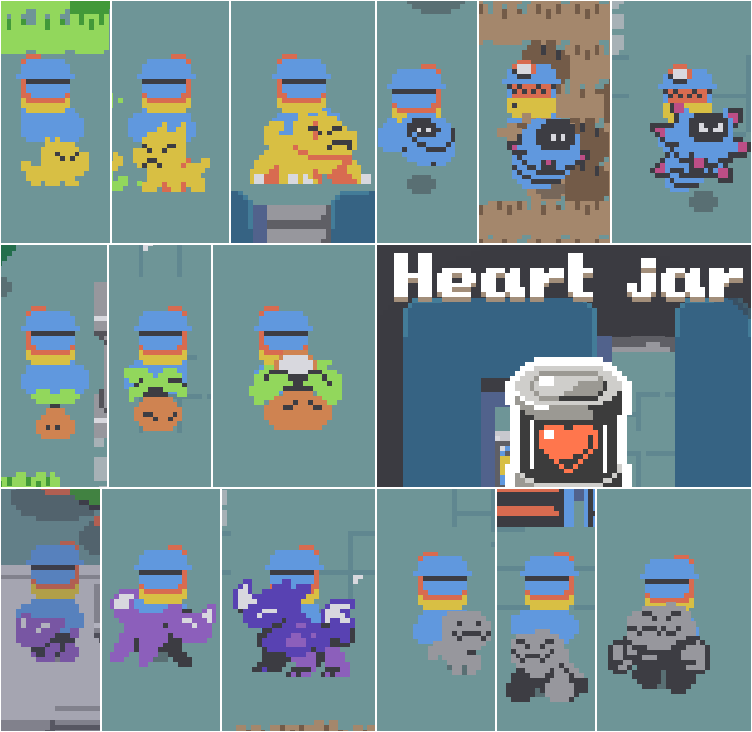 howdy get the other creatures?

oh thanks man I was able to find that tho from like 2 days after the post i a made thnx!

ugh i found them all except for the grey one

Omg I really like this.  Obviously has some strong influences but it's really able to create its own identity.  I especially love all the creatures; they have so much charm in them.  My main criticisms are that the camera seems a bit overly quick in movement and that the wand mechanic seems underutilized, but neither of those were gamebreaking by any means.

Are you still working on this project?  I don't want to put any pressure on you though, it's still a really great standalone demo.

Thank you  ! I take note about the camera and wand, I currently  work on an other game (The Mind Sword ) , I'll return on The Station after this one, it will take some time to finish but yeah I really want to finish it :)

Oh yeah I saw that on your Twitter and it looks super cool too!  I'm excited for both!

So much fun. My kids and I really enjoyed it!

By the way, it works fine on macOS via Wine.

Thanks man ! Really glad than you and your kids appreciate the game, and good to know it can run on macOS :)

it have 3 secrets andI found one at the selection of 3 creatures, on the upper left corner, behind the tree there is a path where there will be another creature firing a laser beam. good luck ( my english is bad )

This was soo enjoyable! The art style is amazing and the game mechanics are really fun. I cannot wait to hear when there will be more content, game is gonna be great. My favorite part was going back through and trying out the different creatures and trying to find all the secrets. Loved this game!

Thanks for the feedback man glad you like it !

The Cave Story one

Only 15 minutes in and I'm already under the game's spell. It's unbelievably charming. Can't wait for the full release!

this game its so good i want buy

FYI - "It's just the demo version, full game will be avalaible later !" (available)

For some unknown reason... My computer didnt want to run it.

i really loved your demo, i got 2/3 secrets and my monster reached Level 3! (i kept the "punchy" one)

Hope to see more of this soon, i will be waiting :-D

Nice job and thanks glad you like it :D

I give your game three thumbs up. Two were mine and the other I found. I enjoyed your demo very much, and I look forward to the games full release.

Really awesome video thanks, I enjoyed a lot to watch it, glad you like the game and thanks for the feedback :)

I'm glad you liked it too. I was happy to try your game out. Please consider contacting me with updates.

My viewers offer feedback on my channel on the games I play. Also, I know your fellow developers would love to hear your opinion on their games too.

Great demo, I really loved the art style, character design, and sound design. Also the leveling up your weapon/character mechanic was pretty fun to see.

In terms of criticism I would say the main thing is that the mechanics felt a bit disjointed in terms of presentation and story. I guess this could be fixed by further explanation in the plot but I wasn't sure why I was a station officer in training and how that had to do with collecting monsters with a wand to use as weapons. It's a cool mechanic but maybe tying it more with the setting could help.

Also at times the combat felt a bit dry, especially because there is an incentive to clear out all the enemies, and some enemies don't really do anything (the shadow guys just stand in a place and emit dark splatter for example).

I would like to see this project again in the future though! :)

Lovely game. Very cute. Great graphics. One complaint: Pressing start to pause, then start to unpause on a controller quits the game.

Thanks ! yep I need to fix this stupid thing, thanks for the feedback !

I really enjoyed the heck out of this demo. The wand was a fun mechanic and just the right amount of challenging in certain places. (I was playing with a controller so maybe it was more floaty than intended, but the challenge was fun) It took me a while to figure out how to beat the boss but once I did I couldn't stop smiling. I've played it a few times since then and oddly enough, never noticed the text that said there were three secrets to be found in the demo so I went back in for more fun searching. I've found two it I can't find the third one. There's a suspicious sewer wall/grate but even my wand won't last too long out there so I don't think it's a speed accuracy thing. But I really like this and look forward to a full game some day. yay.

update. FOUND THE THIRD SECRET. heart jar was what I was missing. yay! this got me to come back to it a lot.

Hehe nice job :D thanks for the feeback and glad you enjoyed it !

I CANT GET PAST THE SECOND LEVER WITH THE CAPTURE WAND

This game is reeeally polished and good for a demo. The cool charming artstyle and gameplay mixes together perfectly. Its like pokemon ranger meets secret of mana and am liking it. My only criticism is the puzzles. The switch mechanic puzzle could get repetitive so adding more puzzles would be good. You could hopefully add more creatures. There are so many shooting styles you could use. Hopefully more boss fights too but anyway this game has a lot of potential and am looking forward to the next release. OH. Will the other versions down the line and the full version be free?

Thanks ! I was no sure if I need to put more effort on the puzzle part or fighting part, but you're right, puzzle are too repetitive, I have some ideas for the full game but I need to think more to find other puzzles :)

Thanks again ! I'll probably reduce difficulty for the full game, thanks for the feedback :)

Suuuuper cute! I loved the character designs a lot and the combat was really fun, especially during the boss fight at the end. I think the teleport gun loans itself really well to making interesting puzzles and bosses.

As for some criticism, the controls felt kind of cramped on my keyboard. I wish they were more spread out. Also, I think it'd be nice to have health drops last a little while longer before disappearing. It wasn't too bad, there were just a couple of times where enemies blocked health, and in defeating them, the health disappeared.

Thank you ! Teleporter was just here to travel quiclky at the initial idea, but use it in the gameplay seem cool so I'll probably think about that ! About controls I thinks the full game will be better, and also curve difficulty more progressive, thanks for the feedback :)

how do you open things? I got to the sewers, and it seems like u have to open the drawers there. what is the button to open stuff?

Keys are G,H and J, I need to add this infos at the start sorry !